“Tradition is not the worship of ashes, but the preservation of fire.”

When it comes to their special day, most Asian couples may find it difficult to tread the line between a wedding that speaks of their own personalities and preferences; and the traditions that have been passed down from generations that may seem old-fashioned and out-of-place. We took on this challenge when we met E & S, the wonderful pair behind the popular bespoke cakeshop Cupplets (@cupplets).

Inspired by their own approach to their craft with their signature Peranakan-motif cakes and their passion for heritage, we envisioned a photoshoot where not only do we celebrate their love and approaching wedding date, we wanted to uphold and honour their Teochew and Peranakan traditions in a modern manner. To simply put, marriage is a life long decision and commitment made by two individuals. However, it also symbolizes the merging of history and legacy of two kindred families which is why we chose to put together elements of oriental style and modern practices for the shoot.

It’s easy to slip into nostalgia when pieces are incorporated just to match a traditional theme. Instead this behind-the-scenes look also reflects our philosophy when it comes to how we work: there has to be meaning each designing decision as well as to ensure there is harmony.

Where it all began: Chinatown

To move forward with the shoot, we took a literal step back and found ourselves in Chinatown. Chinatown itself is an interesting concept since there’s one in every corner of the world, so what makes Singapore’s Chinatown truly Oriental? We were drawn to the familiar sights of shophouses and realized that the architectural designs were unique not just because of how old they were (mid-1800’s architecture from China, particularly Fujian and Guangdong) but that each building had motifs drawn from different influences from the Neo-Classical, Malay, Baroque, Chinoiserie, Art-Deco etc. The idea of retaining the old while incorporating relevant trends from the newer architectural eras resonated with us and became our focus in the shoot.

We haven’t met anyone as adventurous as S+E in pushing the boundaries for cake design. When we dropped the design challenge to S during the planning of the shoot, we gave her a brief idea of the mood and theme we were thinking of exploring – “What is essence of the Singapore Chinese culture?” In turn, they surpassed our expectations with their exploration of different materials, colours and mediums, and created three beautiful individual cakes that complemented each setting of the shoot! As an example, this version was inspired by the intricate embroidery on the Qipao made by Hua Yin Silk. Mimicking the delicate nature of embroidery into the piping of the floral motif, S painstakingly piped each element by hand, dot by dot, to replicate the traditional sewing technique of Pekin / Peking Stitches. This created texture and a beautiful gradient of each motif. To find out more about their detailed process, read their take on the making-of on their page.

Style Element: Qipao and Tang Suit It’s interesting how the idea of the princess gown has taken over universally as The Dress to wear on your wedding day. As Asians, we have also the privilege of traditional dresses as style options to wear on the big day. Unfortunately, most Chinese brides have stayed away from the traditional Qipao with the assumption that it only looks good on an hourglass figure or that they cannot pull off the look without going on a strict diet!

A truly well-made Qipao should be tailored to embrace the natural silhouette and flatter the wearer’s curves. As a case in point, S looks wonderful dressed in a Pearl Pink and Cobalt Blue Qipao featuring lilac winsteria embroidery. The modern Qipao also features intricate lace details and beadworks befitting of princess gowns.

To serve as a foil to S, E donned the classic and simple Tang Suit, with black pants and an old-school boutonniere label attached with fresh flowers. He looked refined and gentlemanly while letting the real star S shine!

In the next shot, E wore a customized piece of Batik with floral prints and the Phoenix. We were really lucky to find this piece and fell in love with it instantly. Not only did it look good on E, the prints on the shirt embodied a beautiful balance of Oriental and Malay culture, and reflecting the reminiscent of a classic Oriental blue and white bone vase. To top it off, E has their signature Peony Box lapel pin, pinned on his chest. Afterall, like the old saying goes “Keep the thing you love close to your heart”. 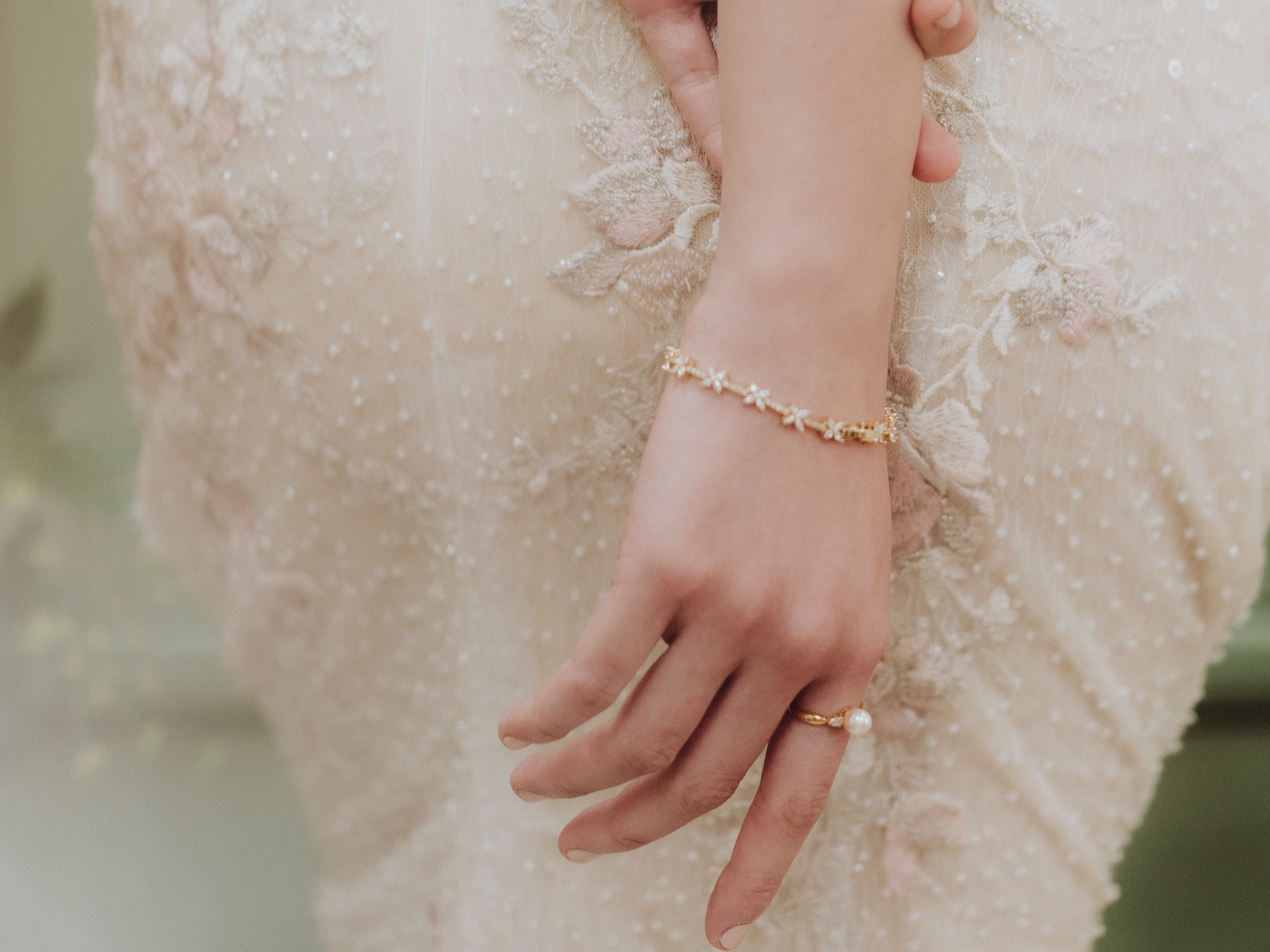 “Something Old, Something New, Something Borrowed, Something Blue” is an old English tradition that the modern bride still practices. For our shoot, we took on this tradition with vintage jewellery from Revelation Jewelry Co and focused on the sentimental value behind the jewellery pieces. While they may not be trendy, the stories behind these small jade pieces, sapphire gold rings and pendents carry the weight of history and legacy of past generations before them. We like to think that all the love borne from these pieces will bring good luck and significance to your wedding! We also believe that having a new jewellery piece with a modern take that reflects your style and personality will kickstart your own tradition and love story to be passed down to your future generation.

Stationery was a fun challenge for us as we wanted to stay away from invitations that scream ‘boring Chinese banquet dinner’! Instead, we decided to adapt current wedding trends of watercolour pieces, modern colour palette and fonts to keep it elegant and Zen-like.

While Western invitations often use calligraphy and watercolour paintings of flora and fauna, we switched things up with Chinese Inkwash paintings by Mr Lee Fook Kong. As a meaningful touch, the stationery features painting of animals in pairs, as well as popular oriental flora such as cherry blossoms and peonies.

Rituals are often misunderstood as being irrelevant in our day and age. Many of these practices have been commodified for the ease of the modern couple who may not understand the significance behind each ritual. We decided to incorporate some of these old-time Teochew practices into the shoot as a bridge and more importantly answer the question of ‘Why?’ behind these rituals.

In this frame, a traditional betrothal basket with oranges and apples is presented in even numbers, with bananas. Unique to the Teochew practice, bananas signifies “连招贵子”, which is essentially a blessing for children in the future. Even the basket is slightly different compared to other Chinese dialects. The Teochews use a cane weaved basket, while the Hokkiens use a black basket known as Bakul Siah.

“四点金”( literally translates to ‘4 touches of gold)’, is presented to the bride by the mother of the groom, as a symbol of her acceptance into the family, and a promise that she will be provided for by the groom and his family. This is not to be mistaken for “嫁妆” (dowry, a gift given by the bride’s parents) as this piece is given to the bride during the 过大礼, before the wedding day. The gifting of “四点金”originates from the Teochew wedding practices.

The practice of gifting fresh pig trotters from the groom to the mother-in-law is recognized as a form of gratitude to her for raising their daughter well – the woman that he’s about to marry!

While modern time have provided a much easier alternative to fresh pig trotters with the canned version, some parents still prefer having fresh pig trotters instead. Did you know that the Cantonese families prefers the gift of a whole roasted pig?

We admit that we have a soft spot for history and tradition but we also love the look of the future. We hope that by sharing our insight and thoughts behind the design process, it gives you inspiration to create your own story during your wedding while honouring your heritage and the generations that came before you. The key takeaway from this shoot is that whatever your style and event plans, it’s important for you to take a closer look at what’s meaningful to you as a couple so that you can begin your journey with touches and details close to your heart. We love to hear what personal symbols and traditions that you’ll like to incorporate for your own special day in the comments!